The Normans in France 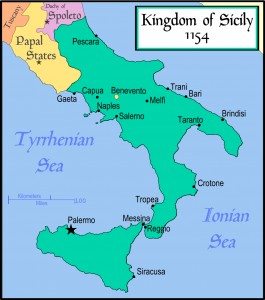 The Normans were "Norsemen" from the north–  from Scandinavia. They exploded out of the north in the 8th and 9th centuries and flooded into almost all European countries. France was one of the most important targets.  But their conquests went beyond the coasts of England and France and stretched all the way to the Mediterranean. The Norman conquest of southern Italy spanned most of the 11th and 12th centuries, involving many battles and independent conquerors. Only later were these territories in southern Italy united as the Kingdom of Sicily, which included the island of Sicily, the southern third of the Italian Peninsula (except Benevento, which was briefly held twice), the archipelago of Malta and parts of North Africa. Immigrant Norman brigands acclimatised themselves to the Mezzogiorno as mercenaries in the service of Lombard and Byzantine factions, communicating news swiftly back home about opportunities in the Mediterranean. These groups gathered in several places, establishing fiefdoms and states of their own, uniting and elevating their status to de facto independence within fifty years of their arrival. Unlike the Norman conquest of England (1066), which took a few years after one decisive battle, the conquest of southern Italy was the product of decades and a number of battles, few decisive. Many territories were conquered independently, and only later were unified into a single state. Compared to the conquest of England it was unplanned and disorganised, but equally complete. (From Wikipedia)

John Julius Norwich has written an elegant intelligent book on the Normans in Italy.  Many of you enjoyed his book on Byzantium in Fall Quarter.

About the Author: John Julius Norwich was born in 1929. He joined the British Foreign Service after studying French and Russian at Oxford, and left the service in 1964 to become a writer. He has also worked extensively in radio and television, hosting the popular BBC radio panel game My Word! for several years, and writing and presenting historical documentaries. His many books include an acclaimed Byzantium trilogy.

From Amazon, Most Helpful Customer Reviews 6 of 6 people found the following review helpful a lush narrative history about a uniquely dynamic people By Robert J. Crawford on March 10, 2013 Format: Paperback

"This is an excellent popular history of the Normans - the Viking people that occupied NW France, got feudal recognition and were absorbed into the local culture, and then expanded outward with exceptional dynamism. Theirs was an absolutely remarkable rise, from pillagers to nobility and finally, statesmen and relatively enlightened sovereigns. While their takeover of Britain (the last time the island was invaded, let alone conquered) is well known, their career in the South has received relatively little attention. This wonderfully readable book remedies that in a series of stories that are at once scholarly and fun. When the Normans arrived in southern Italy, they were little more than a mercenary force, indeed thieves. They may have been able to boast they were born of French feudal lords, but they were essentially adventurers with nothing. Their brutality was as remarked upon as their thirst for status and glory. At the time of their arrival in 1016, Italy was uneasily divided between the germanic Lombards, Greeks with ties to Byzantium, and the papacy. Sicily was occupied at the time by various sultans, a culturally rich if unstable mix with Greeks and Latins as well. The Normans, and in particular the family of the Hautevilles, came onto the scene and clawed their way to the top. Robert, dubbed the Guiscard, became a major figure, eventually gaining the title of Duke of Apulia from the Pope, who annointed sovereigns all over western christendom. With his brother Roger, with whom he occasionally warred, he brought order to the South and opened an invasion of Sicily. Though constantly at war with unruly lords sworn to him under feudal obligation, Robert was merciful and tolerant once in power, to the surprise of his critics."